After losing $350 million to the Seminole Tribe of Florida due to a breach in their gambling compact, House and Senate leaders are considering a new approach to gambling law within the state. Over the years, gambling laws in the state of Florida have caused some confusion due to their complexity. A compact that was established in 2010 between the state and the Seminole Tribe granted the Seminoles exclusive rights to operate banked card games, such as blackjack at its casinos in exchange for a payment of $350 million a year. Meanwhile, pari-mutuel-style casinos have been operating throughout the state while offering similar card games to their customers, resulting in conflict between the state and the tribe.

The Heart of the Problem

While pari-mutuels throughout the state may not go toe-to-toe in revenue with the Seminole’s Hard Rock facility in Tampa, the offering of designated player card games is a clear breach of the compact that was established between the state and the tribe. The violation denied the Seminole Tribe the exclusive rights to these types of games in the state, and thus gave them grounds to deny the state the $350 million payment that the compact guaranteed. This past spring, Gov. Ron DeSantis sought to come to an agreement that would resolve this issue, however, a federal judge ruled that the games being offered by pari-mutuels in the state did in fact violate the compact, giving the Seminoles the right to deny payment. 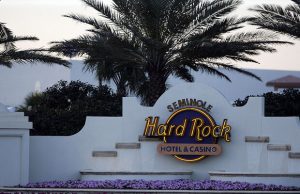 This court ruling resulted in a new deal proposed by Sen. Wilton Simpson, who will take over as Senate President in the upcoming year. Under the new deal, the state would agree to shut down any pari-mutuels who were offering designated player games. In return, the Seminole Tribe would pay the state at least $500 million a year. Despite the attractive figures, DeSantis refused to sign off on the deal, suggesting that more time was needed to properly review the issues surrounding the state’s complex gambling laws. The result, of course, was the Seminole’s refusal to pay the state until the issue was resolved.

A Shift in Thinking

Current Senate President Bill Galvano told the Orlando Sentinel that the state has “moved on from the tribe.” The annual payment that the tribe has committed to since the compact was established in 2010 was not included in the state’s $92 billion budget this year, and Galvano, as well as others, believe that the state can live without it, while exploring other gambling options. The shift in the approach to gambling in the state is good news for pari-mutuels, who could see a number of changes in the coming years, as officials examine ways to increase revenues from these businesses. Potential changes would include an increase in the offering of designated player games, an increase in bet limits, as well as the authorization of sports betting and fantasy sports. These changes would deny the Seminole tribe exclusive rights to designated player games, while exploring and promoting privately run gaming institutions.

It is clear that the pressure for change to gambling law in Florida is mounting, but the timetable for this change remains unclear. A new compact between the state and the Seminole Tribe seems unlikely, as a number of state representatives have issued statements that suggest they are moving on to explore further options. A new gambling bill could be introduced during the upcoming legislative session in January, but the likelihood that it would be passed is slim, as many representatives have yet to come to a consensus on how to approach these issues.

Another hurdle that Florida faces stems from a newly approved constitutional amendment, which requires statewide votes on future gambling expansions. This power was previously held by state legislators, but now any casino gambling expansion, including sports betting, must be voted on by the citizens. The new amendment has been the topic of some debate, as Galvano has suggested lawmakers have the ability to repeal the amendment and restore the legislature’s ability to expand gaming, while proponents of the constitutional amendment have argued the opposite. While the details of Florida’s gambling expansion remain unclear, it seems that the mounting pressure will yield some significant changes to the gambling landscape in the coming months.