On Tuesday, the Norfolk City Council authorized a land deal that would allow for the construction of a new casino resort in the state of Virginia. The deal between the city and the Pamunkey Indian Tribe was met with some pushback at a public hearing, where a number of people tried to postpone the decision to a later date, as reported by The Virginia Pilot.

The deal was passed with a convincing vote of 7 to 1 and allows the city to sell the land near Harbor Park for roughly $10 million. The sale of the land comes with the promise of a casino that offers a combination of both gaming machines and tables. Councilwoman Andria McClellan, who was the sole vote against the deal, expressed her concerns about the casino’s economic impact on the city. Others suggested that the deal felt rushed without the proper research to support the casino resort’s construction.

Details of the Deal

Mayor Alexander released a statement about the casino and resort on Tuesday, offering details about the proposed land deal and construction. The statement reveals that the Pamunkey Indian Tribe will be using the land to construct much more than just a stand-alone gaming facility; The $700 million project will be a resort hotel casino and spa with a minimum of 75- gaming machines, 25 gaming tables, a luxury hotel, upscale restaurants, a 750-seat entertainment facility, and a waterfront promenade. Depending on the types of games available, the proposed project could be a Class 2 gambling facility, rather than a Class 3, which would be more comparable Las Vegas-style table games and slots. The land that the Pamunkey Indian Tribe purchased to construct this casino and resort covers 13.4 acres. 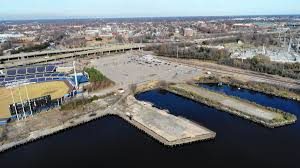 It is expected that the Tribe will ask the federal government to put the newly purchased land into trust, which would make the property part of the Pamunkey’s reservation lands. Doing so would give the Tribe the opportunity to build a tax-exempt tribal casino, assuming an agreement with the state could be reached. Upon the sale of the land, it was announced that the Tribe would be responsible for all costs of construction. This includes the infrastructure, flood mitigation, parking, and utility improvements. Even before the casino resort opens, the Tribe will be responsible for paying the city $125,000 per year. Once the casino is in operation, they will be responsible for paying 4% of net gaming revenues with a minimum payment of $3 million annually.

Concerns of Costs and Rights to the Land

Despite the payments to the city, the deal has done little to ease the concerns of some members of the City Council and residents. As with most casino projects, the overwhelming concern comes from the fear that the expected revenue may fall short of its original projections. Part of this concerns stems from the fact that the city has not conducted a study about the economic impact, and one will not be published until November. Max Shapiro, a resident who attended the public hearing, expressed concerns about the project’s cost to the city and said that he would be preparing a petition for a referendum on the vote by Wednesday morning.

Residents and City Council members are not the only oneswho have expressed their concerns; the Nansemond Indian Tribe has spoken out against the deal, contesting the Pamunkey’s ancestral claim to land in Norfolk. The Nansemond requested the council delay the deal, in order to come to a consensus between other native groups about the history of land ownership. The Pamunkey Tribe has previously noted that throughout the state of Virginia had a lot of overlap between land ownership between tribes and does not claim to be the sole owner of the land they have purchased.

Regardless of concerns, the Pamunkey Tribe will begin preparing to start their project on the newly purchased land. There is no timetable for the start of construction or the completion of the project.