Ultimate X Bonus Streak is a variant of the popular Ultimate X family. Like the original version of the game, it involves winning multipliers on future hands. However, the way the multipliers are earned are much different between the two games.

Ultimate X Bonus Streak is available in three, five and ten-play versions. Most machines start at the penny denomination. You may find some that start at nickel in larger casinos. 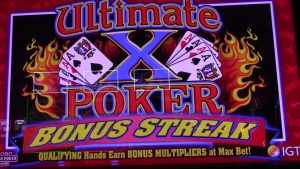 Ultimate X Bonus Streak is not spread at online casinos. You will only find this game at live casinos.

The multipliers and length are based on the game and winning hand. For three of a kind in non-wild card games, one hand with two times and another with four times is awarded. A straight or flush adds an eight times round. A full house or better adds a ten- and twelve-times round. Bonus Poker Deluxe, available on some games, moves the straight down to the three of a kind tier.

Wild card games, like Deuces Wild and Deuces Wild Bonus, only use two tiers. This means that in these games, you can only win up to three multiplier rounds. A flush and full house earn a two times and four times round. A straight flush, five of a kind or royal flush add an eight times round, for a total of three. 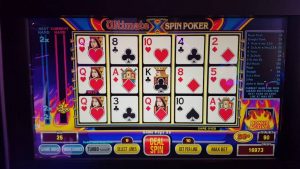 In standard Ultimate X games, the multiplier only lasts one hand, regardless of the strength of the previous hand. The multiplier can only appear in consecutive hands if the player wins again in that slot.

How to Find the Best Ultimate X Bonus Streak Machine

It is hard to compare traditional pay tables to Ultimate X ones. That is because the multipliers greatly increase the return of the game. We recommend playing Bonus Poker, if available. It is generally the best game on a machine that adds about one percent to the payback. Double Bonus Poker and Deuces Wild are other good options. Ideally, you would like a Bonus Poker game that pays seven per coin on a full house. Six per coin is acceptable for lower denominations.

The strategy for Ultimate X Bonus Streak is the same as standard Ultimate X. The major change from traditional video poker is holding on to three-card flushes due to the multipliers.

How to Increase Your Return at Ultimate X Bonus Streak

The only perk you will get while playing Ultimate X is free drinks. To increase this return, drop by the players center before sitting at the machine. Get a players card from the casino. This requires a valid photo ID. Slot attendant at some casinos can also get you a card.

Once you have the card, slide it into the slot on the machine. Make sure that the card is accepted before playing. This will track your bets and award slot points that may be used for free slot play and comps. Higher volume players will receive mailers that include free slot play, plus meal and hotel offers. You may also receive a host if you give enough action.