Texas Hold’em Heads Up Poker is a video poker machine that is spread in several Nevada casinos. These include Aria, Bellagio, MGM Grand and Red Rock Resort in Las Vegas, as well as well as Peppermill Casino in Reno and Montbleu Casino in Stateline at Lake Tahoe.

It is not spread at any online casinos. However, it is easy to find heads up Texas Hold’em games at online poker rooms.

There are three versions of this game. One has no player branding to it. Another features Johnny Chan. The other has Phil Helmuth as its ambassador. 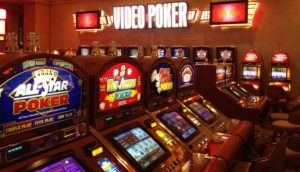 Texas Hold’em Heads Up Poker is unlike any other video poker game. It is the only one where you are playing against the computer. Bluffing is an element of this game, just as betting, folding and raising are. The best way to describe the game is playing an expert player heads up at Texas Hold’em.

The player will need to click the bonus bet button to make it. The button should be pressed multiple times to bet more than one coin. Always make sure when sitting down at the machine that it is not already placed. Click the deal button will make the wager for you if it is set that way. Click it until it shows as zero to remove it.

How to Find the Best Texas Hold’em Heads Up Poker

There is no difference between Texas Hold’em Heads Up Poker machines. Each has the same payouts and bot playing against the player. All games in Las Vegas have the same denominations. These are $1, $2, $5 and $10. Peppermill in Reno also has quarter and half-dollar denominations. The denominations refer to the small blind. This means that a $1 game is $2/$4. A $2 game is $4/$8, etc. All Texas Hold’em Heads Up Poker games use a fixed limit structure. The betting rounds are fixed dollar amounts.

How to Play Texas Hold’em Heads Up Poker

The first step in playing Texas Hold’em Heads Up Poker is getting the game funded. This requires cash. Slide it into the bill acceptor, just as you would at a typical video poker machine.

Playing Texas Hold’em Heads Up Poker is like sitting at an online poker table with two players. The game starts with the player in the big blind. This prevents players from vulturing the game, trying to get the small blind every hand.

Click the deal button to get the game started. If you wish to make the bonus bet, something we recommend against, click the bonus bet button one to five times to match the desired wager. Each coin on the bonus bet relates to the denomination of the game. In a $1 denomination, two coins is $2. This is different than the game play where $1 applies to the small blind. The smallest bet is $2.

Once the cards are dealt, the player with the small blind acts first. The options are to call, which completes the bet by doubling it, raising, which is four times the small blind, or folding, which ends the hand. If the player does not fold, the bot in the big blind acts. The options are check to see the flop if there was no raise, fold to a raise, or raise the player. The player’s options are identical in the big blind in the following hand. The bets for this round are double the denomination. For example, in a $1 game, it is $2.

If the player or bot folds at any point, the hand ends and the chips in the pot are awarded to the opponent. Click the deal button for the next hand.

This betting round and all others after it start with the player that was the big blind. This player starts the action by checking or betting. The bet amount for this round is the same as the preflop one, double the denomination of the machine. If this player bets, the other player may choose between folding, calling or raising.

If the player in first action checks, the opponent may check or bet. Check raising is permitted in this round and the two that follow it.

If the player and bot call here, the turn is placed face up. This is the fourth exposed card on the table. This betting round plays like the last one, except that the bet is four times the denomination of the machine. In a $1 game, the bet is $4.

After the turn’s betting round, the river is shown. This is the fifth and final board card. This betting round is the same as the previous one, including the bet limit.

If the player and the bot do not fold by the end of the river betting round, there is a showdown. The player with the best hand wins the pot. It is graded identically to how a hand of online poker would be. If the player and bot have the same hand, the pot is split.

The strategy for Heads Up Texas Hold’em Poker is not defined. The bot has different personalities. The player never knows which is in action. Play it just as you would against a normal player at a poker site.

The best way to increase your return in this game is to study fixed limit heads up Texas Hold’em. This can be done with poker coaching sites and books.

Most Texas Hold’em Heads Up Poker machines do not accept players cards. Red Rock is an exception. This casino gives players one point for every $12 wagered in the game. This is four times worse than the standard rate. There is enough betting action to still make this worth playing with a card. Other casinos still base mailers from action on this machine in terms of issuing free slot play or comps. However, no slot points are awarded.

To get a players card at Red Rock, go to the Boarding Pass center. It is on the other side of the sportsbook from the machines, which are located next to the poker room. You will need a valid ID to get the card.