Fives Aces Poker is a video poker variant. It is available in three games. The options are Jacks or Better, Double Bonus and Double Double Bonus. Fives Aces Poker uses a 53-card deck. The additional card is an ace that does not have any suit. It has a star on it. Its only use is as an ace to complete a straight or be used with other aces.

The additional ace changes the strategy is several situations. We go over that in a later section.

Five Aces Poker is not spread at online casinos. You will only find it at bricks-and-mortar ones.

How to Play Five Aces Poker

Five Aces Poker is spread in two versions. One uses a single line. The other is 3/5/10 play. Both play like any other traditional video poker machine. Choose your denomination and the Five Aces game from the machine’s menu. Insert cash into the machine and make your desired 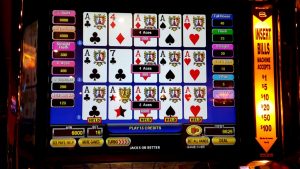 wager amount and the number of hands that you would like to play. Note that Five Aces Poker is only available on Game King machines that offer multiple games. You will find Five Aces in the tab on the left side of the screen.

How to Find the Best Five Aces Poker Machines

The strategy for all Fives Aces Poker games mirrors the standard version of the same game, with a few exceptions. In Jacks or Better, split full houses when three aces are dealt, split two pair when one of the pairs is aces, and hold a bare ace over face cards, even in Jacks or Better. Do not hold unsuited face cards with a straight draw in Double Bonus or Double Double Bonus. That is because a pair of aces is the lowest hand that gets paid.

How to Increase Your Return at Five Aces Poker

Once you have found the best Five Aces Poker pay table and learned the best strategy, it is time to play the game. Before you get into action, make sure to get a players card from the casino. You will get this at the players center. You will need a valid photo ID. Slide the casino’s players card into the slot. It should welcome you by name to confirm it was accepted.