Joker Poker is the second-best video poker game available. Its full pay table returns 100.65%. Only Deuces Wild, at 100.76%, has a higher return-to-player.

There are three versions of Joker Poker. On the West Coast, kings or better is the most common 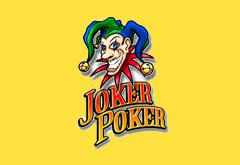 version. On the East Coast, it is two pair or better. The kings or better is the better of those two.

Why You Should Play Joker Poker

Joker Poker is a low variance game when compared to most bonus games but not Jacks or Better. If you can find a full pay table, it is one of the best games to play in the kings or better format. The full pay version of two pair or better is difficult to find. There are a few California tribal casinos with it. Barton’s in Jackpot, Nevada also spreads it.

Why You Shouldn’t Play Joker Poker

Joker Poker is an advanced game to learn. The strategy is the most complex that you can find. There are hundreds of exceptions to basic strategy. It is impossible for all but the savviest of players to use advance strategy at Joker Poker. This is due to all the issues raised when a joker is dealt.

The basic strategy also does not match non-wild card games. For example, you should throw away a winning pair in Joker Poker to go for three to a royal flush in many cases. You should throw away three of a kind if dealt the joker and a four-card straight flush with zero or one gaps. As you can see, this can get confusing quickly.

Another problem is the lack of full pay machines out there. You can only find the kings or better ones in Las Vegas. The short-pay machines tend to have terrible returns, often under 98%. The full pay versions do not qualify for most promotions. Some pay no points, while others short them to players.

These are the two full pay tables for Joker Poker. One uses kings or better as the bottom payout. The other uses two pair. Multiply the number of coins by the amount wagered.

Lesser kings or better Joker Poker pay tables will reduce the four of a kind payout. Each coin drop changes the return-to-player by about 0.85%.

Where to Find These Joker Poker Pay Tables 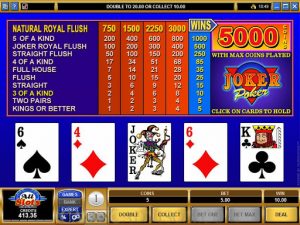 The two pair version is found at several California tribal casinos, including Barona Casino, Lucky 7 Casino and Viejas Casino. In Nevada, you will find it at Aquarius Casino in Laughlin, Eldorado in Reno and Four Jacks and Barton’s 93 in Jackpot.

There are two strategies to follow, depending on whether you are playing kings or better or two pair.

If none of the above applies, discard all.

Hold a full house, straight flush, royal flush or five of a kind. Keep a straight or flush without a four-card straight or royal flush draw. After that, follow the list below in order from top to bottom:

If none of the above applies, discard all but the joker.

Stay on a full house, straight flush or royal flush. Hold a straight or flush if you do not have four to a royal flush. After that, follow the list from top to bottom:

If none of the above applies, discard all cards.

If dealt joker, hold a full house, straight flush, royal flush or five of a kind. Keep a flush unless you have three suited connectors with it. Hold a straight without a zero or one gap straight flush or royal flush draw. After that, follow the list below:

If none of the above applies, discard all cards except the joker.

How to Increase Your Return at Joker Poker

These pay tables are only found at live casinos. You will need to get a players card to increase your return. Note that most full pay machines pay discounted points and few, if any, comps. You will still get something for your play. However, if you only play these machines, you risk getting no mailers or comps. Keep that in mind before using a players card on this and any other full pay machines.